Are Modern English Versions of the Bible Corrupt? -- Part 7

This is the seventh part in a multi-part series concerning social media posts that are circulating and accusing the NIV and other modern English translations of the Bible of taking out important words and concepts, leaving out verses, and other nefarious things.

Now we proceed to the “missing verses” from the Gospel According to Luke. 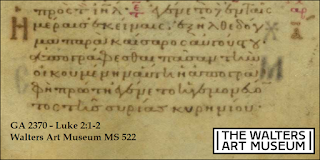 The King James Version here has this:
36 Two men shall be in the field; the one shall be taken, and the other left.

The NIV and ESV don’t include this verse, but have a footnote pointing out that some manuscripts include words similar to Matthew 24:40 at this point in the text.

This is a case very similar to that of Matthew 17:21, which we discussed in part 5 of this series. A scribe copying Luke and knowing the parallel passage in Matthew likely thought that the copy of Luke he was working from had a sentence missing, so he inserted the sentence he knew from Matthew (albeit in a different order—in Matthew’s version, Jesus talks about the two men in the field before he talks about two women grinding grain at a hand mill; in Luke, the women are mentioned in verse 35, and the sentence with the men is inserted after that in the KJV).

So the verse is still in the Bible—just not in Luke, because it probably wasn’t in Luke’s original autograph.

In the account of Jesus’ trial before Pontius Pilate, here the KJV reads:
17 (For of necessity he must release one unto them at the feast.)

The NIV and ESV at this point have footnotes stating that some manuscripts here have wording similar to Matt. 27:15 and Mark 15:6.

We could call this, “Same song, second verse” (pun intended). It’s the same likely situation of a scribe trying to harmonize the manuscripts as he was copying them. This is the case of several of the verses that have allegedly been “removed” from the modern translations.

If there were actually some conspiracy to try to alter the truth of the Bible, the “conspirators” were pretty incompetent, because they left other verses in the Bible that state the same truths.[1]


[1] Thanks to my friend Dr. Carmen Imes for this observation when she wrote responding to this same meme in 2015 on her blog at https://carmenjoyimes.blogspot.com/search?q=textual+criticism. I discovered her articles on this topic after my first four posts were already up and I had two more written and scheduled.