Are Modern English Versions of the Bible Corrupt? -- Part 3

This is the third in a multi-part series concerning social media posts that are circulating and accusing the NIV and other modern English translations of the Bible of taking out important words and concepts, leaving out verses, and other nefarious things. 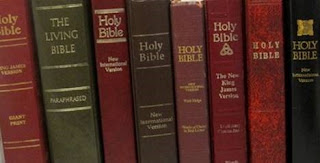 Now, let's move on to the second half of the statement below (see part 1 for the context):


The NIV and ESV has now removed 64,575 words from the Bible, including Jehovah, Calvary, Holy Ghost and omnipotent to name but a few...

The third word mentioned, which is really two words, is “Holy Ghost.” This one can be especially contentious in my tribe (Pentecostalism). Some people, because of the longstanding influence of the KJV in the American church, insist on only using “Holy Ghost” (and if they’re really spiritual, they say it as one word: “Holyghost”). But it is really just a matter of English words that have changed meaning over time.

In modern English, the word “ghost” is usually associated with disembodied spirits of the dead. The Greek word for this is φάντασμα (phantasma), from which we get the English word phantom.” This word appears only twice in the Greek text of the New Testament (Matt. 14:26 and Mark 6:49—the account of when Jesus came walking on the water to his disciples, and they though he was “a spirit” as the KJV puts it, or “a ghost” as the NIV and ESV translate it). All of the other places that the KJV uses “Holy Ghost” for the third Person of the Trinity, the Greek word translated “Ghost” is πνεῦμα (pneuma), which means wind, breath, or spirit.

Because of the somewhat negative meaning of “ghost” today, the modern translations render the phrase πνεῦμα ἅγιον (pneuma hagion) as “Holy Spirit.” And, if we look at other languages such as Spanish, we find that the words used are Espíritu Santo (even if you don’t know Spanish, you can easily see that is “Spirit”), not Fantasma Santo.

So alleging that the modern translations have taken the Holy Ghost out of the Bible isn’t even a valid claim.

The fourth and final specific word this post claims is omitted from modern Bibles is “omnipotent,” which comes from the Latin for “all-powerful” (omni=all, potentia=power). This word only occurs in the KJV in Rev. 19:6, where the Greek word is παντοκράτωρ (pantokrator). This word appears again in the Greek text of the New Testament in Rev. 21:22, where the KJV translates it as “Almighty”—which is the exact same English word the NIV and ESV use in Rev. 19:6, the only place the KJV uses the Latin-based word “omnipotent.” So the authors of these accusations against the modern translations are simply accusing the NIV, ESV, and others of consistently translating a Greek word using just one of the two words the KJV uses for it.