Are Modern English Versions of the Bible Corrupt? -- Part 5

This is the fifth part in a multi-part series concerning social media posts that are circulating and accusing the NIV and other modern English translations of the Bible of taking out important words and concepts, leaving out verses, and other nefarious things.

Today we will deal with the verses from Matthew that the Facebook post claims are taken out of modern translations. 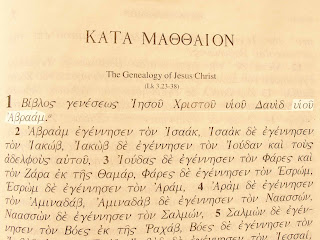 (We must keep in mind, of course, that chapter and verse numbers do not even exist in these ancient manuscripts—the biblical text was first divided into chapters in a twelfth century copy of the Latin Vulgate, and verse divisions were added in the mid-1500s.[1])

Matthew 17:21 in the KJV says:
21 Howbeit this kind goeth not out but by prayer and fasting.

If you look for Matt 17:21 in the NIV, you will not find the verse text there, but you will find a footnote: Some manuscripts include here words similar to Mark 9:29. The footnote in the ESV reads: Some manuscripts insert verse 21: But this kind never comes out except by prayer and fasting. And if you go to Mark 9:29 in the NIV, you will find:
29 He replied, “This kind can come out only by prayer.”

The ESV for Mark 9:29 reads:
29 And he said to them, “This kind cannot be driven out by anything but prayer.”

While this is not exactly the same as the wording from Matt. 17:21 in the King James Version (which mentions both (prayer and fasting), it is very close. Let’s tackle this verse in two steps. First, why is this verse missing from Matthew’s Gospel in the NIV and ESV, and second, why does the Mark passage in the NIV not include “and fasting”?

As the footnote in the NIV (and ESV) point out, there are differences in the Greek manuscripts of Matthew at this point in the text, with the older manuscripts such as Codex Vaticanus not including this verse. The simplest explanation for how this difference came to exist in the Greek manuscripts of Matthew is this:
A scribe is making a copy of Matthew. When he gets to this passage, he remembers having copied the parallel passage from Mark 9 at some previous time (or he remembers Mark’s version of the event from having heard it read in church services). He thinks, “But the way I know this story, Jesus here says something about prayer and fasting.” So he looks at a copy of Mark he has available, and sure enough, there’s another sentence in Mark’s account. So the scribe assumes that the previous scribe, who produced the manuscript he is working from to make a new copy, must have accidentally left that sentence out. So to fix what he believes to be an error in the copy from which he is working, he adds that sentence into his copy of Matthew. Now, any future copies made from the new copy he is making (and any copies made from them, and so on), include this sentence from Mark inserted into Matthew. (Remember: chapter and verse numbers did not yet exist at this point in history, so he couldn’t tell whether the sentence was missing or not just by looking for a skipped number, like critics of modern translations do.)

“But what about ‘and fasting’ being left off Mark 9:29 in the NIV, ESV, and other modern translations?” you may ask. Both Codex Sinaiticus and Codex Vaticanus, two of the oldest Greek manuscripts we have access to, omit “and fasting.” Scholars debate the reasons as to why the great majority of manuscripts include these words, yet the oldest ones do not. Perhaps some copyists thought that prayer alone was too simple.[2] Many scholars believe that the practice of regular fast days that developed in the early church following the first century may have led to the insertion of these words. James A. Brooks, in his New American Commentary series volume on Mark, writes:
All except the two earliest and generally regarded best Greek manuscripts, two early versions, and one early Christian writer add “and fasting” (KJV, NKJV), no doubt because of the prevalence of fasting in the early and medieval church (a similar addition is in Acts 10:30; 1 Cor 7:5). The idea is completely out of place, however, in a passage that stresses the necessity of dependence on God instead of human resources of any kind.[3]

The key point here is that casting out demons depends on reliance on God, not on our own power or innate authority, and should not be approached lightly.

So, the truth taught in Matthew 17:21 as the KJV has it has not been removed from the Bible in modern English translations. It is still there in Mark 9:29; it has just been omitted from Matthew 17, where it likely did not exist in the first place.

This is one of the verses actually mentioned in the meme itself. In the King James Version, it reads:
11 For the Son of Man has come to save that which was lost.

The NIV and ESV do not include this verse in Matthew, but do have a footnote pointing out that some manuscripts at this point insert the words of Luke 19:10. And if we look at Luke 19:10 in these modern translations, we see:
10 For the Son of Man came to seek and to save the lost. (NIV and ESV have identical wording)

In this particular instance, it doesn’t seem to be that the copyist was trying to fill in what he considered to be “missing,” as the surrounding passage (which has to do with the punishment of offenders) does not match the context of the verse in Luke (which is the story of Zacchaeus). Craig Blomberg thinks that a later scribe may have added these words here to connect this parable more closely with Matthew 9:13 (“for I am not come to call the righteous, but sinners to repentance” KJV, or in the NIV, “For I have not come to call the righteous, but sinners”).[4]

Again, the truth of this verse has not been removed from the Bible. Modern translations simply don’t include these words at this location in Matthew, because the manuscript evidence indicates it was probably not originally part of Matthew’s Gospel.

In the King James Version, this verse reads:
14 Woe unto you, scribes and Pharisees, hypocrites! for ye devour widows’ houses, and for a pretence make long prayer: therefore ye shall receive the greater damnation.

The ESV and NIV do not include verse 14, but have a footnote: Some manuscripts include here words similar to Mark 12:40 and Luke 20:47.

In the NIV, Mark 12:40 says:
40They devour widows’ houses and for a show make lengthy prayers. These men will be punished most severely.

while Luke 20:47 says:
They devour widows’ houses and for a show make lengthy prayers. These men will be punished most severely.

The case with this “missing verse” is very similar to the instance of Matt. 17:21 discussed above. A copyist working from a manuscript of Matthew and noting the similarity between the “woes” Jesus is pronouncing in this passage and the warnings to the disciples in Mark and Luke may have decided to insert this verse to harmonize Matthew with the other two. Not only is this verse not present in Codex Sinaiticus and Codex Vaticanus, it is also missing from the oldest translations into Syriac and Coptic.[5]

Bottom line: the material about the scribes and Pharisees devouring widows’ houses and making a pretense of long prayers is still in the modern English translations, just not in Matthew, where it probably didn’t exist in the original and the earliest copies.

In the next installment of this series, we will address the alleged missing verses from Mark’s Gospel listed in the post.