Are Modern English Versions of the Bible Corrupt? -- Part 1

This is the first in a multi-part series concerning social media posts that are circulating and accusing the NIV and other modern English translations of the Bible of taking out important words and concepts, leaving out verses, and other nefarious things.

There’s a proverb that says, “A lie can make it halfway around the world before the truth finishes tying its shoelaces.” This article is my humble attempt to help get the running shoes on the truth and get it out of the starting block.

In the past few months I have seen the argument coming up again on social media as to why the New International Version (and other modern translations of the Bible) are unreliable, corrupt, or even part of a satanic plot to lead people astray.

Let me state up front that I recognize most people are sharing these memes and posts because they possess a zeal for God’s word. But, as the Apostle Paul said in Romans 10 regarding many of his Jewish  contemporaries, “their zeal is not based on knowledge.”
The latest version I have seen circulating has the following graphic: 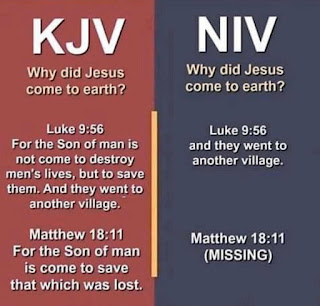 This image is accompanied by the following wording in the body of the Facebook posts I have seen being shared:

NIV was published by Zondervan but is now OWNED by Harper Collins, who also publishes the Satanic Bible and The Joy of Gay Sex.

•The NIV and ESV has now removed 64,575 words from the Bible, including Jehovah, Calvary, Holy Ghost and omnipotent to name but a few...

•The NIV and ESV has also now removed 45 complete verses. Most of us have the Bible on our devices and phones especially "OLIVE TREE BIBLE STUDY APP."

•Refuse to be blinded by Satan, and do not act like you just don't care. Let's not forget what the Lord Jesus said in John 10:10 (King James Version).

There is a crusade geared towards altering the Bible as we know it; NIV, ESV and many more versions are affected.

•THE SOLUTION:
If you must use the NIV and ESV, BUY and KEEP AN EARLIER VERSION OF the BIBLE. A Hard Copy cannot be updated. All these changes occur when they ask you to update the app. On your phone or laptop etc.

There’s a lot of error to address here. Before we get into the details of specific verses that do not appear in modern translations, and the reasons behind that, let’s deal with some more basic errors in these claims. I’ll take these in the order they appear in the post.

NIV was published by Zondervan but is now OWNED by Harper Collins, who also publishes the Satanic Bible and The Joy of Gay Sex.

HarperCollins does not “own” the NIV. In the 1970s, while translation work on the NIV was still being done, funding for the translation team, the Committee on Bible Translation (CBT), was running out. It looked like they weren’t going to be able to complete the Old Testament translation, and the NIV might exist only as a New Testament. Zondervan Corporation, which had signed on as the exclusive U.S. licensee for producing printed copies of the NIV, provided an infusion of cash as an advance on the royalties they had agreed to pay to the New York Bible Society, the initial sponsor of the new translation.[1]

Zondervan was acquired by Harper & Row, a division of News Corp., in 1988.[2] In 1989, News Corp. purchased Collins & Sons, creating HarperCollins.[3] The copyright of the text of the NIV translation remains with Biblica (the current name of the International Bible Society, formerly the New York Bible Society), and neither Biblica nor any of its licensed printers has editorial control over the translation work of the biblical scholars on the CBT.[4]