Are Modern English Versions of the Bible Corrupt? -- Part 4

This is the fourth part in a multi-part series concerning social media posts that are circulating and accusing the NIV and other modern English translations of the Bible of taking out important words and concepts, leaving out verses, and other nefarious things.

We now arrive at the major claim of these posts: that modern English translations have removed entire verses from the Bible:


•The NIV and ESV has also now removed 45 complete verses. Most of us have the Bible on our devices and phones especially "OLIVE TREE BIBLE STUDY APP."


...you will not believe your eyes.

Before addressing the individual verses, we need to cover a topic called textual criticism[1] that is an important factor in understanding why these verses do not appear in some translations. Before you get scared, textual criticism is not about criticizing the biblical text. Rather, it is a method of taking a critical look at manuscript copies that contain differences, in an attempt to determine what the originals most likely said. It is a discipline that is applied to all sorts of ancient documents, not just the Bible.

Before the invention of the movable type printing press, all copies of the Bible and other works of literature were made by hand. As one copy of Scripture was starting to wear out from extended use, or a copy was desired for a church in another location, someone who knew how to write—but not always professionally trained as a scribe—would hand-copy that book of the Bible. As you can imagine, no matter how careful the copyist was, mistakes were bound to be made, especially if the person was just copying the letters they saw, but didn’t have formal training.

Once an error was made in a copy, that error then got copied into later copies made from it. These differences between manuscripts are known as variants. We have over 5800 Greek manuscripts (handwritten copies) of the New Testament (or portions of it, like a singe book or even a piece of a single page, like the papyrus fragment known as P52, from the Gospel of John, pictured here). 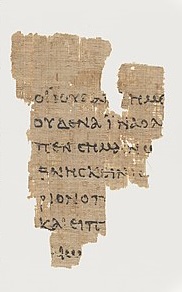 Experts in textual criticism are able, through studying which manuscripts have similar variants, together with where the manuscripts were discovered geographically, to group them into “families” and deduce the “ancestry” of each copy. They are also to determine with a high degree of confidence what the original written text (known as the autograph) most likely said. Most of the time, the older the manuscript is, the closer to the original reading it is likely to be.

Most of the variations among manuscripts are minor spelling differences. The letter nu (which has the same sound as an English n and looks like an English letter v) can sometimes be added at the end of a word if that word ends with a vowel and the next word starts with a vowel, to avoid having two vowel sounds together.[2]

In the case of actual misspellings, most of the time they are obvious, and the original intended word is easy to discern. Sometimes, the misspelling creates a valid Greek word, and the context of the whole sentence must be used to determine what was most likely the original spelling. In a few very rare cases, both possible words could make sense, and commentators debate which one is correct.

In 1516, the Dutch scholar Desiderius Erasmus of Rotterdam published a version of the Greek New Testament he had edited by studying the various Greek manuscripts available at the time, most of which were from the twelfth century. Erasmus’ Greek New Testament, and subsequent editions that were edited to correct errors and add notes about variant readings, became known as the Textus Receptus, or Received Text, in an edition published in 1633.[3]

When the King James Version (or Authorized Version, as it is sometimes called, because it was the English translation authorized by the king of England to be used in the Church of England, of which the English monarch was the chief authority) was translated in 1611, the translators were working with a “base text” based on Erasmus’ work, along with previous English translations that had been made previously.

Since the 1600s, many more Greek manuscripts of the New Testament have been discovered. As was previously mentioned, we now have over 5800 manuscripts, from fragments of single pages, to complete books of the New Testament, up to complete (or almost complete) copies of all 27 books (such as Codex Vaticanus, dating from the early fourth century, and Codex Sinaiticus from the middle of the fourth century[4]). Many of these manuscripts, some up to 800 years older than the manuscripts Erasmus had access to, don’t have all of the exact same passages included in Erasmus’ work. The editions of the Greek New Testament used by translators today, based on this larger body of available manuscripts, are referred to as critical texts.

Despite the multitude of manuscripts, with all their variants, scholars have determined that our New Testament text in Greek is over 99.5% pure. Out of 20,000 lines of Greek text, only 40 are in doubt, and none of them affect any major doctrine of Christianity.[5]

So were verses taken out of the Bible by the modern translations, as these social media posts allege? We will get into the mystery of these “missing” verses in the next installment in our series.


[1] If you really want to dig into the nitty-gritty of textual criticism, I suggest you check out these resources at BiblicalTraining.org. You have to create an account to access the classes, but there is no charge to do so.
https://www.biblicaltraining.org/textual-criticism-corrupt/why-i-trust-my-bible
https://www.biblicaltraining.org/textual-criticism/daniel-wallace
Also, a good introductory book that doesn't require prior knowledge of biblical languages is Textual Criticism of the Bible: Revised Edition available at https://www.amazon.com/Textual-Criticism-Bible-Revised-Methods/dp/1577996631
[2] https://enacademic.com/dic.nsf/enwiki/11772864
[3] https://www.gotquestions.org/Textus-Receptus.html
[4] https://www.gotquestions.org/Codex-Sinaiticus-Vaticanus.html
[5] https://www.str.org/w/is-the-new-testament-text-reliable-