Put that verse back in its context

I've been listening to this wonderful review and analysis of words given at the end of 2019 or the beginning of 2020 by people who claimed to have heard a prophetic message from God. The host are not cessationist naysayers who believe that the gifts disappeared with the death of the last apostle of Jesus Christ, but are themselves Pentecostal/Charismatic believers who hold to the continuation of the gifts of the Holy Spirit into the current time. Also, the pastors and scholars they had on as guests to review and analyze these "prophetic words" are also continuationists (they believe the gifts are still valid and active today). 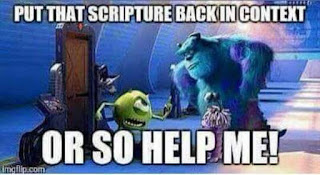 One of the prophecies started out by claiming that 2020 was the "year of the mouth," and then proceeded to quote Job 22:28 from the King James Version:

"Thou shalt also decree a thing, and it shall be established..."

Talk about a verse ripped from its context. If we look at Job 22:1, we see that this quote is taken from one of the discourses of Eliphaz the Temanite, one of Job's "comforters" who proved to be anything but a comfort in the midst of a righteous man's suffering. In chapter 22, Eliphaz is basically telling Job that if he will quit defending himself and insisting that he has done nothing to deserve the tragedy that has befallen him, then his fortunes will change. He just needs to submit to God (which Eliphaz insists Job hasn't yet done, though we know differently from the opening chapters of the book), and then whatever Job decrees (KJV) or decides (NIV), will be done for him, and everything will be sunshine and rainbows ("light will shine on your ways" NIV).

If we look ahead to Job 42:7, we find God speaking directly to Eliphaz:

I am angry with you and your two friends, because you have not spoken the truth about me, as my servant Job has.

So here we have God himself saying that much of what Eliphaz had spoken earlier in the book was not true.

The lesson here is that just because a quotation is from the Bible, doesn't mean the statement being quoted is true. While the Bible truly records and reports all that it speaks of, it is sometimes recording the false words of  a person.

This reminds me of a photo of a page from a "verse-a-day" inspirational calendar that I have seen several times on social media. 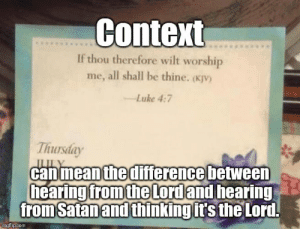 The page of the flip calendar includes the King James Version rendering of one of Satan's statements during Christ's temptation in the wilderness. The way it is presented makes it sound like God is promising health and wealth to those who worship Him. But in context, this is a tempting false claim from the devil trying to persuade Jesus to take a shortcut to kingship. There's no telling what went through the calendar publisher employee's mind when they were picking verses for the project, but there's no excuse for such a blatant error to have gotten through had there been anybody with even the most basic education in Bible interpretation on the project.

But back to the prophecy about the "year of the mouth." If there is no excuse for a calendar publisher to make the mistake shown in the photo above, there is even less excuse for someone who claims to be a minister of the gospel—much less a prophet speaking for God—to make the kind of mistake made in claiming that Job 22:28 means that we can simply "decree" something at it will come to pass. Such an error—and it is theological error—shows that either the person making the claim has not had proper training in basic Bible interpretation techniques, or, worse, has blatantly chosen to ignore and forsake that training.

As the Apostle Paul admonished his son in the faith, Timothy:

Do your best to present yourself to God as one approved, a worker who does not need to be ashamed and who correctly handles the word of truth. (2 Tim. 2:15, NIV)