The Greatest Threat Lies Within

As Dr. Martin Mittelstadt pointed out when he was a guest lecturer in the New Testament Theology class I took in seminary, the book of Acts recounts alternating external and internal threats to the early church. First, after Peter and John were used by God in the healing of the lame man at the temple gate, the Sanhedrin threatened them not to teach in the name of Jesus any more. Then in Acts 5, the church faced the case of Ananias and Sapphira, in which two church members tried to make themselves look more pious and generous than they really were. In that same chapter (starting in verse 17), we once again find persecution and threats from the Jewish religious leaders. In Acts 6, a dispute over the Greek-speaking widows being neglected in the charitable food distribution threatened the unity of the church. The pattern of challenges from outside and inside the body of believers continues throughout the rest of Luke's account. 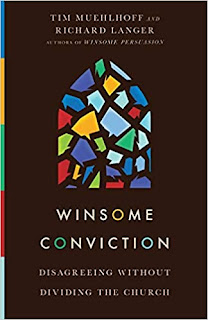 In the introduction to their book Winsome Conviction: Disagreeing Without Dividing the Church, authors Tim Muehlhoff and Richard Langer write about how, when they were starting to write the book, they were trying to pick a current issue about which Christians were divided as an illustration. First, they considered the controversy over the presidency of Donald J. Trump and the Democrat-led impeachment in the House of Representatives.

As they were working on the book, the COVID-19 pandemic struck. Large gatherings, including church services, were shut down. There were debates as to whether masks were effective or not. Was this the start of a government campaign against the church, or would the weeks and months of no in-person services simply lead to formerly semi-regular churchgoers deciding that attendance wasn't really that important to them, even when churches could start meeting together again?

But before the manuscript was finished and ready to go to press, the news was flooded with the violent death of George Floyd at the hands of police officers. Some Christians thought racism was just an individual matter (of which they themselves were not guilty, of course), while others tried to point out the existence of systemic racism, often in the face of being accused of having capitulated to critical theory.

There was no lack of currently active examples they could use when it came to divisive issues.

In chapter 2 of their book, Muehlhoff and Langer mention several other potential threats to the church: postmodern relativism, the LGBTQ agenda, sexism in the culture, the failure of churches to deal with sexual predators, Islamic fundamentalism, and government persecution of Christians around the globe. They then write:

Without denying the significance of any of these threats, we believe the greatest threat to the church today is the same as it has been in every generation since the New Testament was written: quarreling. Persecution strengthens the church. Intellectual and cultural challenges deepen our faith and stimulate our theological thinking. Ethical commitments that conflict with the culture make us stand out as salt and light—or at times may provoke us to purify our own lives to become better salt and light. Quarreling, on the other hand, is insidiously dangerous because it kills from within. (pp. 18-19)

It's so easy to let other concerns take our eyes off our mission, which is making disciples of Jesus Christ. Our Lord himself stated clearly that a house divided against itself cannot stand (Matt. 12:25).

In the immortal words of Pogo the Possum, "We have met the enemy, and he is us."