Is a "cashless society" really a sign of the end times?

Over the past couple of months, with the coin shortage in the United States during the COVID-19 pandemic, I have seen many people posting on social media that the shortage is a fulfillment of end-times prophecies, moving us toward a cashless society for the Beast’s global economy.

One post in particular said: “This morning I stopped at a convenience store...they would not take cash!! No coins. Signs of the times.” 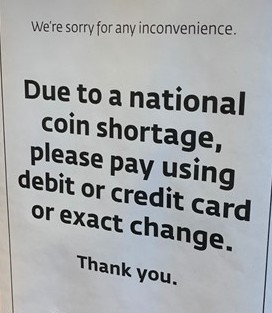 I responded to that post with the question that has been cycling through my brain for a few weeks: “Where in Scripture is there any mention of a cashless society?”

To which someone replied, “So what do you think Rev 13 is describing, if not a cashless society?”


For as long as I can remember, I have heard that part of the Antichrist’s one-world government was going to be a “cashless” society. People usually base this belief on Revelation 13:16–17. But does the text actually say that? Let’s go to the Scripture itself and see:

It also forced all people, great and small, rich and poor, free and slave, to receive a mark on their right hands or on their foreheads, so that they could not buy or sell unless they had the mark, which is the name of the beast or the number of its name.

Not a word there about not using physical money, only that a person has to have the mark as proof he/she worships the beast and ascribes to his system in order to be permitted to conduct commerce.

We see foreshadowings of this in the LGBTQ+ attempts to put people out of business who won’t bow to their agenda. In some parts of the world, those who follow Christ instead of the traditional local religion are cut off economically; no one will sell to them or do business with them because they refuse to worship the false god.

People still use cash in those situations; they’re just not permitted to participate in the economy unless they bow to the powers in control and have proof they have done so.

New Testament scholar Craig Keener, in his volume on Revelation in the NIV Application Commentary series, writes concerning this passage:

A mid-third-century emperor demanded certificates of sacrifice to the emperor to participate in commerce and escape prosecution; he likely sought to eradicate Christians. Many Christians compromised by bribing officials or by using other practices; some preferred death and were accordingly executed. Even in John’s day, however, one could not handle money without involvement in the imperial system. To withdraw from an economic system permeated with imperial worship—even to withdraw from trade guilds, whose meetings included meat offered to idols—was in many cities economic suicide. Well-to-do Jewish communities in cities like Sardis had much to lose by boycotting the system, and Christian merchants as a smaller minority would lose even more.

So it’s not necessary that we have a cashless society in order for the Beast to implement economic control. National leaders who oppose God have had ways of doing this in various forms throughout world history.

Now would a cashless society make it easier to control buying and selling? Absolutely. In a world where financial transactions could only be conducted electronically, an absolute ruler could simply order a freeze on the accounts of people who don't take the mark showing their allegiance to him.

But similar control could also be implemented simply by establishing a new currency that would be the only legal tender. In my own lifetime Mexico, our neighbor to the south, revalued its currency, the peso, because inflation and exchange rates had made it where the smallest usable bill that would actually buy anything had a few zeroes at the end, and their 50 centavo coin was worth less than a U.S. penny (the metal in the coin was worth way more than the face value). So they introduced the “new peso,” and people in Mexico had a set amount of time to exchange their old paper money for new bills using the new measurement.

The Beast could simply set up a new unit of money that would be used worldwide. Individuals would have to have the mark to exchange their dollars, pesos, francs, etc., for the new money. So even if you could find someone willing to give you something in exchange for good old greenbacks, that old currency would only work for them if they also could find someone else willing to accept those bills as well. At this point, you might as well go back to straight bartering for goods, but even then it's a matter of government surveillance and individual informants turning in people who try to skirt the system.

The linking of the idea of a cashless society to this passage seems to have started with Hal Lindsey and others writing on Bible prophecy in the 70s and 80s, based on changes that had been taking place in the world of banking technology. But we must always be careful to interpret the happenings in our society through the lens of the Bible, rather than interpret the Bible through the lens of current events. It’s a very fine line, and one that is deceptively easy to cross.
Posted by Brian Roden at 1:54 PM