One of the major problems with communication in our modern era is the absolute glut of information. We're bombarded by 24-hour cable news, online news sites that send alerts about stories to our smart phones, and links and memes shared by family and friends on an endless list of social media platforms.

Every voice is competing to be heard in a very crowded, noisy room. The American public seems to have a very short attention span and to not want to take the time to read anything that does detailed analysis or requires deep thought and self-aware reflection.

There's even an abbreviation for that -- TLDR, which stands for "too long, didn't read." (Consider the irony of shortening a four-word phrase to four letters, because using the full words would take too long for the writer to type and too long for the consumer to read.)

I suspect some of you, if you scroll down this post, may even say "TLDR" and move away without reading further. (But if you do that, you'll just be proving my point.)

Everyone seems to want complex, multi-faceted issues to be presented in a graphic image with some clever wording superimposed, and for that brief summary to tell them everything they would ever need to know about the topic (or at least enough to feel they have made an "informed" decision). I'll admit that quick, bullet-list summaries are often useful to give us the gist of something and help us determine if we want to invest the time and energy to dig further.

But sometimes, the "quick overview" is obviously flawed, even from a surface-level examination. Yet people will quickly share even severely flawed talking points or memes if they resonate with them on an emotional level, regardless of the factual accuracy of what is being presented.

A recent example of such a faulty presentation is this image a friend posted Facebook not too long ago. 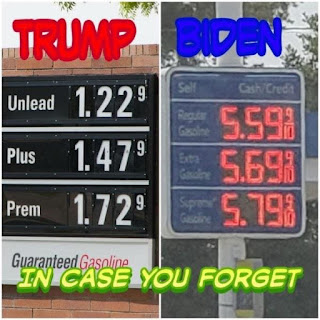 Now, obviously from the photos, these prices are not from the same gas station. They may not even be from gas stations in the same city, or even the same state. There is nothing to make us believe the person who put this meme together ever even saw both of these gas prices with his or her own eyes, because we all know these photos could have been found using Google Images and simply placed side-by-side in a photo editing program.

The editor of the photos just says that one is under Trump's presidency, and the other is under Biden. But there is no detailed information as to the places or dates the photos were taken that would lead a critical thinker to accept them as valid evidence.

IMPORTANT: Before anyone calls be a leftist, liberal, or Democrat, let it be known that I usually vote Republican. In fact, I voted Republican in every presidential election since I turned 18 and could register to vote. The only times I did not vote for the Republican candidate in a presidential race were 2016 and 2020, when my conscience would not let me vote for Trump (both times I voted for third-party candidates who I fell better embodied a biblically-based, Christian approach to the issues).

My point here is not about which party is right or wrong, or which policies are better for the economic flourishing of the greatest number of Americans. My driving concern is that we pursue truth, rather than repeating and sharing misleading information.

As I was writing this post on September 4, 2021, I used the gas tracker page of a local TV station, which is linked to a site called GasBuddy.com. The main purpose of the page is to find which local gas stations have the lowest prices. But there is also a price trends feature on the page, allowing one to see a graph of gas prices in different places over a period of up to six years.

I live in central Arkansas, and the graph for the past 6 years here looks like this: 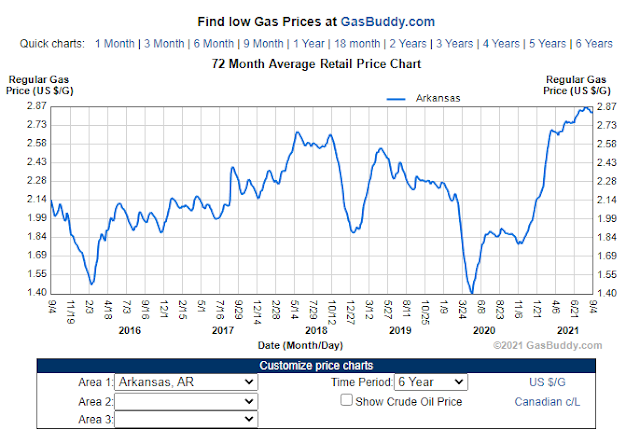 Yes, prices are much higher now than they were when the bottom fell out during the spring 2020 lockdowns (when gas prices nationwide took a nose dive), but are only about 23 cents higher per gallon than they were in October 2018, during Trump's presidency. (If we look at the chart, we can see how someone could just as easily have grabbed a photo of a gas station from October 2018 and labeled it "TRUMP" while placing it alongside a photo from February 2016, when the price was about $1.55 per gallon, and labeling it "OBAMA.")

When I saw the original comparative photo posted above, I thought that maybe the gas prices labeled "BIDEN" might be from California, which usually has the highest gas prices in the country due to the high fuel taxes the state government there imposes. So for comparison, here is the chart for Los Angeles, CA, for the same six years: 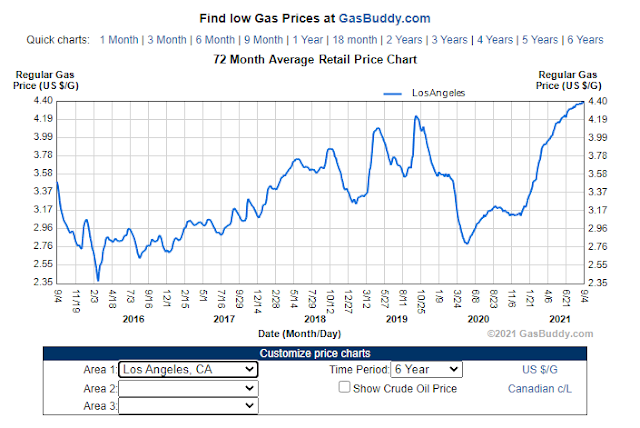 The current price in Los Angeles as of this writing is $4.40 per gallon -- no where near the $5.59 and higher shown in the meme. And as the chart shows, since gas prices started climbing again after the low point during the pandemic (when no one was commuting and supply of fuel greatly overtook demand), the price in Los Angeles still hasn't been over $5.00 per gallon. (Even San Francisco, CA, is only at $4.57 per gallon today.)

For the nation as a whole, the current prices looks like this:

When I first saw the meme that sparked my investigation, I was thinking that the TRUMP gas price was probably from early summer 2020 in a state with lower fuel taxes, and the BIDEN price was from a high-tax state like California in recent weeks. But as the national average numbers immediately above demonstrate, even California, with the highest average gas price in the country, has not yet gone over $5.00 per gallon for regular unleaded. (And according to auto club AAA, the highest the national average for regular unleaded has ever reached was $4.114 per gallon on July 17, 2008.)
Interestingly, it's only when I change the location to somewhere in Canada, such as British Columbia, that the average price per gallon goes above $5.00. 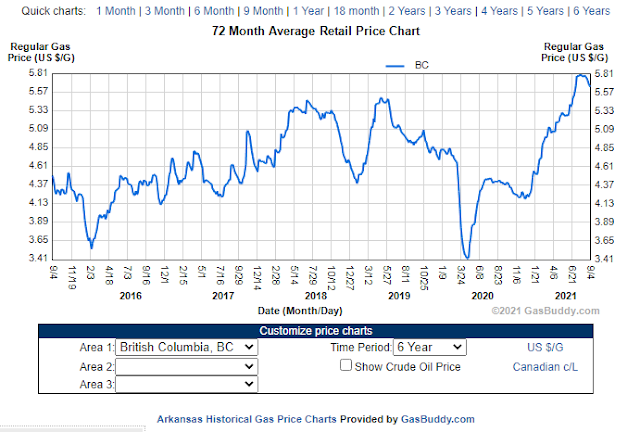 So I think we can safely conclude that the person who created this meme was being dishonest, cherry-picking and manipulating the data to support a predetermined narrative. At the risk of being accused of "both-sidesism," I will firmly declare that both sides are guilty of these kinds of tactics.

Now, beyond all these localized price trend comparisons, we also need to consider the fact that while a president's policies can and do affect consumer fuel costs, there are also other factors outside our country that impact prices as well. The price per barrel for crude oil, which is impacted more by the oil producing countries than it is by domestic political decisions, has been climbing steadily since April 2020, and the price for gas at the pump has followed the trend line of the price of crude oil.

The point of all this isn't really to give a discourse on economics. The point is that we need to think critically about claims that are set before us. We all suffer from confirmation bias, favoring sources that agree with something we already believe over those that may contradict our preconceived ideas.
Let's all remember that we are to be both pursuers and purveyors of truth, even when the whole truth may not completely support the party, person, or policies we most resonate with. For those of us who call ourselves Christians, we must make truth and accuracy a priority. For if we peddle half-truths and sloppy data when it comes to earthly things, why should anyone trust what we say about eternal things.

In our zeal to defend our side and prove how bad the other side is, let us not make truth and honesty the victim.

As the fine people over at the AND Campaign say on every episode of the Church Politics podcast, we need to think carefully and analyze information, not as Republicans, not as Democrats, but as Cristians.