5 Roadblocks and 5 Aids to Communication

Dr. Darrell L. Bock's latest book, Cultural Intelligence: Living for God in a Diverse, Pluralistic World, includes some timely information concerning five things that lead to cutting off dialogue and communication, and five things that can help foster conversation with those with whom we have foundational disagreements. Following is a quick synopsis of both sets of points, quoting excerpts from pages 62-66. 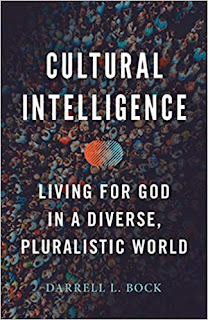 Five Things that Can Take a Conversation Down

1) The Quick Confession with a Pivot. This is a “well, sort of” move that in fact dismisses the acknowledged point. This reaction fails to really be helpful for two reasons. First, it refuses to focus on what might be contributing to the problem or issue from the end I support….Second, even though there's an issue on my side, the pivot ultimately disrespects the problem that has been raised and attempts to pin the majority of the blame elsewhere.

2) The Exorcism. This is the use of a label to kill an idea. Here we label in a word or two something as coming from this "bucket," play "Taps” over it, and put it to rest as not worthy of more comment.

3) Assigning Motive. Another tactic is to assign a motive, usually a negative one, to the position being presented. …To know another person's will requires a prophetic gift that most of us lack. It also communicates a significant level of disrespect, suggesting that the real reason for something is not what's being presented.

4) Thinking Poorly about Seeking Common Ground. It's the feeling or conviction that if I move toward someone and acknowledge a point, then that acknowledgment represents a defection from my view.

5) Tribalism. Tribalism says I can never show weakness or acknowledge a shortcoming lest my side lose ground. … Tribalism is a clinging to power or advantage, but illegitimately, because a possible truth has been dismissed. … Even positive self-criticism is treated as a sign of weakness or defection from my side. An important counterexample involves the prophets. One could say they were very pro-Israel. They loved and believed in the cause of the people of God. They were tribal in that sense, but they also were extremely self-critical. They were honest about when their side came up short.

2) Stick to issues. Another positive step is to stick to the issue at hand and move through topics one at a time. … This can be called slow thinking because you're working through issues in a reflective, manageable manner versus randomly jumping quickly from one thing to the next.

4) Be honest about where we need to listen and learn. … Partial knowledge that is believed to be comprehensive knowledge is dangerous.

5) Develop the ability to parse layers within a view.

These ten points are just a small portion of the excellent information in this book by a respected biblical scholar. There's a lot more worth reading, so I encourage you to purchase a copy, read it, and put Dr. Bock's suggestions into practice, always keeping in mind that "People are not the enemy. They are the goal." (p. 13)