On Truth in Social Media Posting

Recently, a friend posted the following image on Facebook. 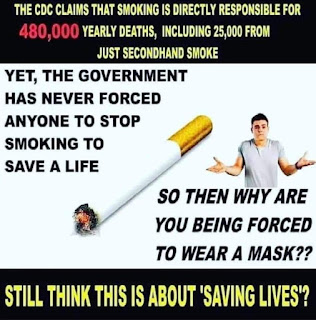 While it is technically true that the government has never forced anyone to stop smoking, the government at all levels – federal, state, and local – has passed laws and regulations placing restrictions on where and when smoking in permitted.

In 1990, the Federal Aviation Administration banned smoking on almost all domestic flights in the U.S., making mandatory what some individual airlines had already been doing for their own flights during the late 1980s. (See this article for more.)

In 2006, Arkansas, the state in which I have lived my entire 51 years of life, passed the Arkansas Clean Indoor Air Act, prohibiting the smoking of tobacco products in most enclosed workspaces, with some limited exceptions (private residences, designated smoking rooms in hotels, businesses with fewer than 3 employees, outdoor areas, and bars and restaurants what do not allow persons under 21 to enter, etc.). Under this law, local municipalities can place even tighter restrictions on public smoking if they desire.

Another 2006 law, the Protection from Secondhand Smoke for Children Act, prohibited smoking in a car where children under the age of 6 and weighing less than 60 pounds were present (Arkansas was the first state to pass such a law protecting children from secondhand smoke in vehicles). This law was updated in 2011 to raise the age of the child to 14.

Some people see traffic laws, such as speed limits and mandatory seat belts, as a restriction on their personal freedoms. British Primer Minister Margaret Thatcher – whom no one would accuse of being a liberal – initially opposed the proposed mandatory seat belt law in the UK, until someone showed her how much the government was spending on medical care to treat people injured in car accidents whose injuries were caused by (or made worse by) not wearing a seat belt (discussed as an anecdote here). But most reasonable people would agree that regulations on motor vehicle safety and operation are necessary for the common good.

Going back to the graphic that prompted this post: no, the government is not forcing anyone to stop smoking. But it does place restrictions on who can purchase tobacco products and where they can be used, for the purpose of improving the overall health of the general populace. Regulations regarding face coverings during the COVID-19 pandemic are similar, applying to public spaces (shopping centers, offices, churches, buses, airplanes, etc.) and not to individuals' private homes or vehicles. Just like secondhand smoke laws, which are about protecting other people from the harmful chemicals smokers produce, mask regulations are about helping keep a possibly contagious person who doesn't know he/she is carrying the virus from spreading it to other people. Do masks eliminate the spread of the virus? No. But they do seem to reduce it.

If you want to make a case for whether masks are effective, and therefore whether they should be required in certain spaces, then do so with scientific studies and peer-reviewed research. But be honest about it. Don't make your argument using an invalid comparison that doesn't hold up.

P.S. I highly recommend these 10 Commandments of Social Media