Why do we see everything as restricted to two options?

I recently heard a Christian brother commenting on the current political situation. He said:

I was a math nerd in high school, so pardon the follow Cartesian graph: 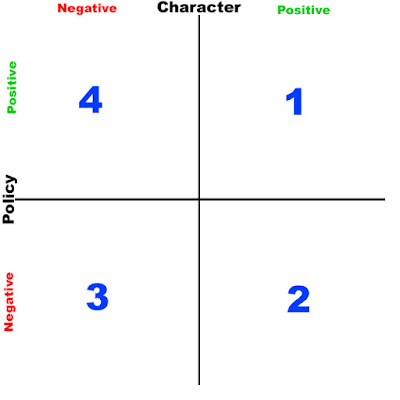 The statement quoted above presents only quadrants 2 and 4.

We should strive to avoid quadrant 3 at all costs. Negative policies combined with negative character is a recipe for guaranteed disaster.

With a person in quadrant 4, we'll see some forward movement on certain issues on which the person agrees with us. But, as we have seen in our current political environment, if we voice any critique of the negative character (or certain policy decisions we don't agree with), the negative character of the person causes him or her to lash out and treat us as enemies. Many people, faced with this outlook, refuse to present any criticism for fear of being demeaned or losing access.

Many people will disagree with me, but I think in most cases someone in quadrant 2 is a better choice than someone in quadrant 4, as long as part of their positive character is a teachable spirit and willingness to listen to input from others. A teachable person can be swayed on policy matters: even if they don't come around completely to our point of view and implement a policy 100% to our liking, they can be convinced to move toward our position. Often, persuasion isn't so much about moving someone from one extreme to the other, as it is moving them two steps out of their current box. I think this is appreciated by the massive "swayable middle" in our country who frequently vote more against the extremes of people on the opposite side than they do for the people who are more to the extreme on their own side (when looking at things from the classical left/right spectrum).

Of course, in an ideal world we would always have candidates in quadrant 1 as options. But when when we don't, that doesn't mean we shouldn't push the quadrant 2 and 4 people toward quadrant 1.

We can appreciate President Trump’s policies that favor religious freedom, the sanctity of life, judges who support original intent with regard to the Constitution, etc., while still calling him to a higher standard of personal behavior, to reconsider his reduction of refugee visas (which have adversely affected Christians fleeing persecution in the Middle East), and to raise the level of discourse by being the “bigger person” even when the other side chooses to be petty and childish. We must not allow ourselves to be roped into an "all-or-nothing" mindset out of fear of losing the president's ear or becoming the target of a Twitter tirade.