Beyond Racial Division: A Unifying Alternative to Colorblindness and Antiracism by George Yancey

When Narcissism Comes to Church: Healing Your Community From Emotional and Spiritual Abuse by Chuck DeGroat 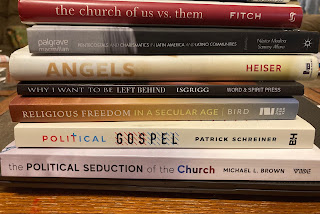 There were several books that could be grouped according to a category or theme, so I'm listing those here to help organize the list a little better.

Why I Want to Be Left Behind: Exposing the Fiction in Today's End-Times Prophecy Teaching by Daniel Isgrigg

The End of History: Pentecostals and a Fresh Approach to the Apocalypse by Robert Menzies

Grassroots Pentecostalism in Brazil and the United States: Migrations, Missions, and Mobility by Paul Palma

Open to the Spirit: God in Us, God with Us, God Transforming Us by Scot McKnight

The Church of Us vs. Them: Freedom from a Faith That Feeds on Making Enemies by David Fitch

Religious Freedom in a Secular Age: A Christian Case for Liberty, Equality, and Secular Government by Michael F. Bird

The Political Seduction of the Church: How Millions Of American Christians Have Confused Politics with the Gospel by Michael L. Brown

The Bible and the Ballot: Using Scripture in Political Decisions by Tremper Longman III

Truth Over Tribe: Pledging Allegiance to the Lamb, Not the Donkey or the Elephant by Patrick Miller and Keith Simon