Who or what is the "real you"?

I saw the following posted by someone on Facebook back in April:

I have also often heard (usually at funerals) statements such as,"That's not the real Brother Johnny, that's just a shell."
Just this week, I saw this meme that promotes a similar sentiment: 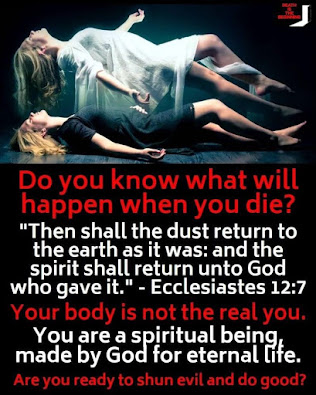 Even C.S. Lewis seems to have fallen into this way of thinking in the famous line, "You don't have a spirit. You are a spirit, and you have a body."
While I agree with the importance of making sure one's spiritual life is square with the Creator God, it seems many Christians have forgotten that human beings were created to be EMBODIED, and will be embodied again in the resurrection and new creation. As N.T. Wright puts it, the Christian hope isn't just life after death in a disembodied state in the clouds, but physically recreated "life after life after death."
According to what I understand of biblical anthropology, being human seems to imply a material/immaterial union, rather than a spirit that only lives in a body for the first segment of time of the human being's existence.
Timothy Tennent writes:

Fragmentation between body and spirit, which devalues the body and heightens the inner "true" spirit of one’s inner self, is a gnostic rather than Judeo-Christian view of the human body." (1)

The early gnostic heresy of docetism claimed that Christ only appeared to have a human body, as the gnostics believed that material things like bodies were inherently evil, while the immaterial spirit was intrinsically good. They simply couldn't fathom a perfect Christ taking on something so low and base as an actual physical human body. But the second Person of the Trinity really took on flesh and dwelled among us, and now sits at the right hand of Majesty in a resurrected, glorified, human body. As Tennent goes on to say,

If our bodies are untrustworthy and only serve to mask the true self that is within, then the incarnation of the second person of the Trinitv as Jesus of Nazareth cannot be trusted as a reliable means for God s most profound self-disclosure in history. (2)

One of the unintended consequences I see of this line of thought that the spirit is the "real person" is the ballooning of people saying they're one gender trapped in the other gender's body. But if the "true person" is the spirit, rather than the natural/supernatural combination that constitutes a human being, who's to tell someone they can't "be true to their true self" and change their body to align with what they think their spirit is?
Christians need to take some time to actually think through what we believe about what it means to be truly human, according to God's original design. Let's be careful that we don't inadvertently support unbiblical conclusions and positions because we repeat popular catch phrases, rather than being diligent in understanding and stating what Scripture really says.
UPDATE: This podcast touches on this subject at points
Notes:
(1) Timothy Tennent, For the Body: Recovering a Theology of Gender, Sexuality, and the Human Body, p. 16
(2) Ibid, 25.
For further reading on this topic, I suggest the following books:
For the Body: Recovering a Theology of Gender, Sexuality, and the Human Body by Dr. Timothy Tennent
Body, Soul, and Life Everlasting: Biblical Anthropology and the Monism-Dualism Debate by John W. Cooper (I have not yet read this, but it was recommended to me by a fellow Bible and theology nerd)
UPDATE 7/14/21: I just listened to this excellent interview with Sam Allberry, which addresses many of these same issues.
Posted by Brian Roden at 9:23 PM